Advertisement cookies help us decide which products, services and offers may be relevant for you. We use this data to customise the marketing content you see on websites, apps and social media. They also help us understand the performance of our marketing activities. These cookies are set by us or our carefully-selected third parties.
https://www.inchcape.co.uk/blog/news/porsche-classic-restoracing-championship-2019//-/media/1b96bbb289af403b8ad5606a8fa08262.jpeg
https://www.inchcape.co.uk/images/brands/Inchcape/header/logo.png Inchcape

Over the spring and summer months, Porsche Centre Bournemouth joined other participating Porsche centres to compete in the Porsche Classic Restoracing Championship - and we’re thrilled to say, they were crowned the winners!

We’re going to give you a full run-down of the contest from start to finish so you can find out all about this great event, and see how our Porsche Centre Bournemouth team raced to victory.

The first Porsche Classic Restoracing Championship took place in 2018 to celebrate the twentieth anniversary of the launch of the iconic Porsche Boxster. Numerous Porsche Centres throughout the UK entered, and were required to find and restore a 986 Boxster S and use it to compete in a series of races.

The event was such a triumph that it was brought back again this year, and given that Porsche Centre Bournemouth achieved great success in 2018, they were very excited to take to the track in their Restoracing car once again. 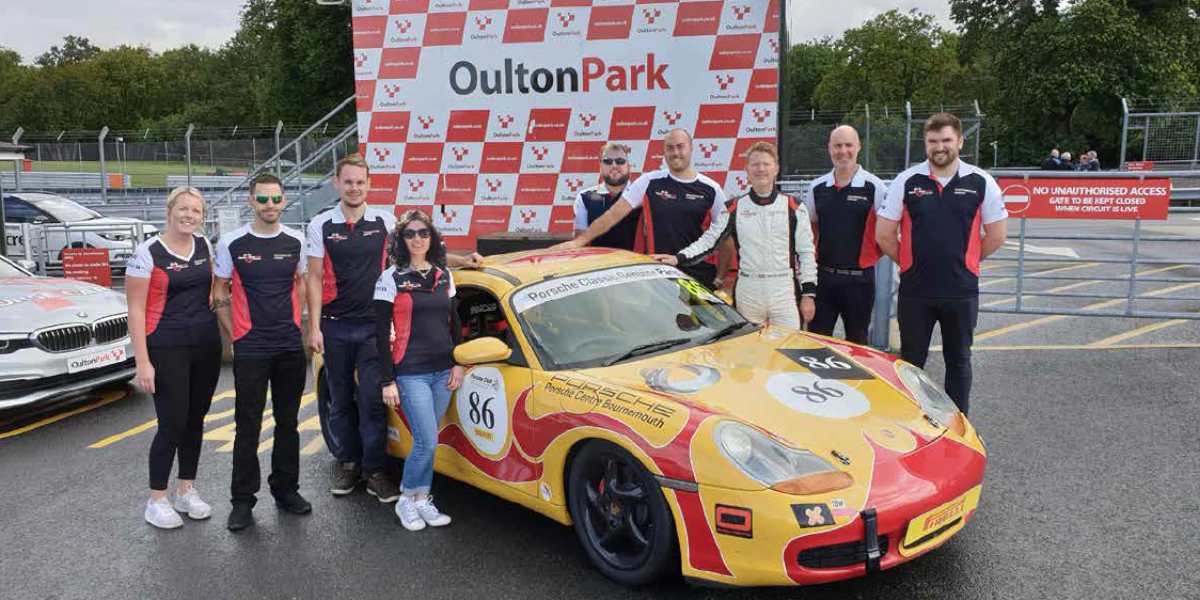 The Porsche Bournemouth team of nine were very optimistic for this year’s championship. All competing teams were allowed to improve upon the car they had raced the year before to make sure it was in the best possible shape.

Regulations for more experienced drivers had changed slightly, meaning that our chosen driver, Ben McLoughlin, would have to carry a 30kg weight penalty. However, the team were willing to accept this, as they were very confident that Ben would be the best driver for the challenge.

In the first race of the season, Ben drove magnificently, and despite very strong competition, he was the first to cross the finish line. Afterwards, the team realised there were issues with the brakes, but thanks to the larger support team we had this year, repairs were quickly carried out. Soon enough, everyone was set for the second race of the day.

Despite missing the holeshot into the first corner, and an accident occurring in the backfield that resulted in the safety car being deployed, Ben took yet another victory in the second race. To come away with fastest laps and wins in both races, the team were off to a strong start, leading the championship from the get-go.

As round two of the championship arrived, our Boxster had undergone several improvements, but we faced another 15kg weight increase due to our round one performance. Regardless of the 45kg weight disadvantage, Ben qualified on pole for both races, led the whole of the first race, and secured the team’s third win.

The second race took place later in the afternoon, and once again, Ben showed his experience by expertly guiding the Boxster around the track, while other less experienced drivers were spinning off in the damp conditions. It was another fantastic race for Porsche Centre Bournemouth, with Ben finishing on the top of the podium. That’s what we call a clean sweep!

A lot of effort had been put in to prepare our car for this round because a 60kg weight increase had been implemented. Ben managed to gain pole position for both races, but the extra weight meant the interval to the other teams was only 0.5 seconds.

Ben won the first race, crossing the line just 0.762 seconds ahead of this main rival, Will Heslop in the Wolverhampton car. The deployment of two safety cars during the race meant it was a challenge, and the second race was just as tough.

An overtaking collision caused fluids to leak onto the track at Paddock Hill, which led to Ben being rubbed into the gravel by fellow driver Matt Bird when both cars went wide on the corner. Ben was able to go on to take second, but he couldn’t quite make the win this time.

The Porsche Bournemouth Restoracing Team headed to Snetterton for the penultimate round of championship. In the first Qualifying session, Ben lost out on pole position, but was able to master the action-packed race, despite wet conditions, to achieve yet another win.

Race two saw Ben start from pole position once more, but Will Heslop showed fantastic pace throughout. Ben managed to keep him at bay, but on the final corner of the final lap, Will just pipped him to the post.

Although Ben crossed the line in second place, his series of sterling wins meant the team was just a few points away from victory as they headed into the fifth and final race.

In a blink, the last race of the Porsche Classic Restoracing Championship came around. Our car was still on top form following round four, so there was little preparation required.

Ben led first qualifying for the initial laps, but ultimately Matt Bird qualified on pole, followed by Will Heslop. For the first time in the championship, Ben would be setting off from the second row.

Due to wet conditions, race one started with a pace car followed by a rolling start. Will got a strong start and developed a very comfortable gap, but Ben was very speedy on the first lap, during which he overtook Matt, and began to chase down Will.

Ben continued on to take the lead, and kept his cool to stay at the front for the rest of the race, earning another victory. At this stage, the points acquired from the race meant that Ben and the Porsche Centre Bournemouth team were the 2019 Restoracing Champions!

With the pressure off, but the desire to end on a high still strong, all of the drivers put in excellent performances for the final race. In the end, though, Ben could not be caught, and finished the season with a triumphant win.

It’s been announced that the championship will be back with full force next year, returning as the ‘Porsche Classic Boxster Cup’.

Ourselves, and the other Porsche centres are very excited to be able to compete again, but next time the competition will also be open to members of the public, which will no doubt add an even more thrilling dynamic to the season.

Huge thanks goes out to the Porsche Club and Porsche Cars GB for such a fantastic racing season. We also offer our congratulations to all of the centres who took part and contributed to making the event so enjoyable and memorable.

But, of course, our biggest congratulations goes to our very own Porsche Centre Bournemouth for their incredible performance throughout the championship, and for bringing home a phenomenal victory. Well done, team!