Advertisement cookies help us decide which products, services and offers may be relevant for you. We use this data to customise the marketing content you see on websites, apps and social media. They also help us understand the performance of our marketing activities. These cookies are set by us or our carefully-selected third parties.
https://www.inchcape.co.uk/blog/news/driving-versus-uber-the-costs-compared//-/media/b5e48e332a134d33aafcfa1c19f7370d.jpg
https://www.inchcape.co.uk/images/brands/Inchcape/header/logo.png Inchcape

Driving vs Uber: The Costs Compared

Driving vs Uber: The Costs Compared

Cab-hailing services like Uber are more popular than ever. With many millennials feeling priced-out of car ownership, or putting their priorities elsewhere, the mobile app has become the go-to for many when they need a get-around.

It was, of course, bargain prices that catapulted the company to international attention; and plenty of the app’s users will tell you they feel like they’re getting value for money. But we couldn’t help but wonder. Once all the costs are tallied up, how does the price of an Uber really compare against car ownership? With new vehicle registrations expected to drop a further 6% this year , are the public making a sound choice, or are they falling for a misconception?

We crunched the numbers to calculate the average cost per mile for two affordable car models. Focusing on both a used Toyota Prius and a used VW Golf, we added up all the charges involved in owning and running these vehicles over a 4-year period. Using a range of sources, we recorded the purchase cost of the car, then subtracted the equity you could expect to receive back when you sell after the four years, to find the model’s ‘actual cost’. Next, we factored in petrol, tax, servicing, MOT and insurance costs, as well as fines one might receive for parking or speeding tickets. 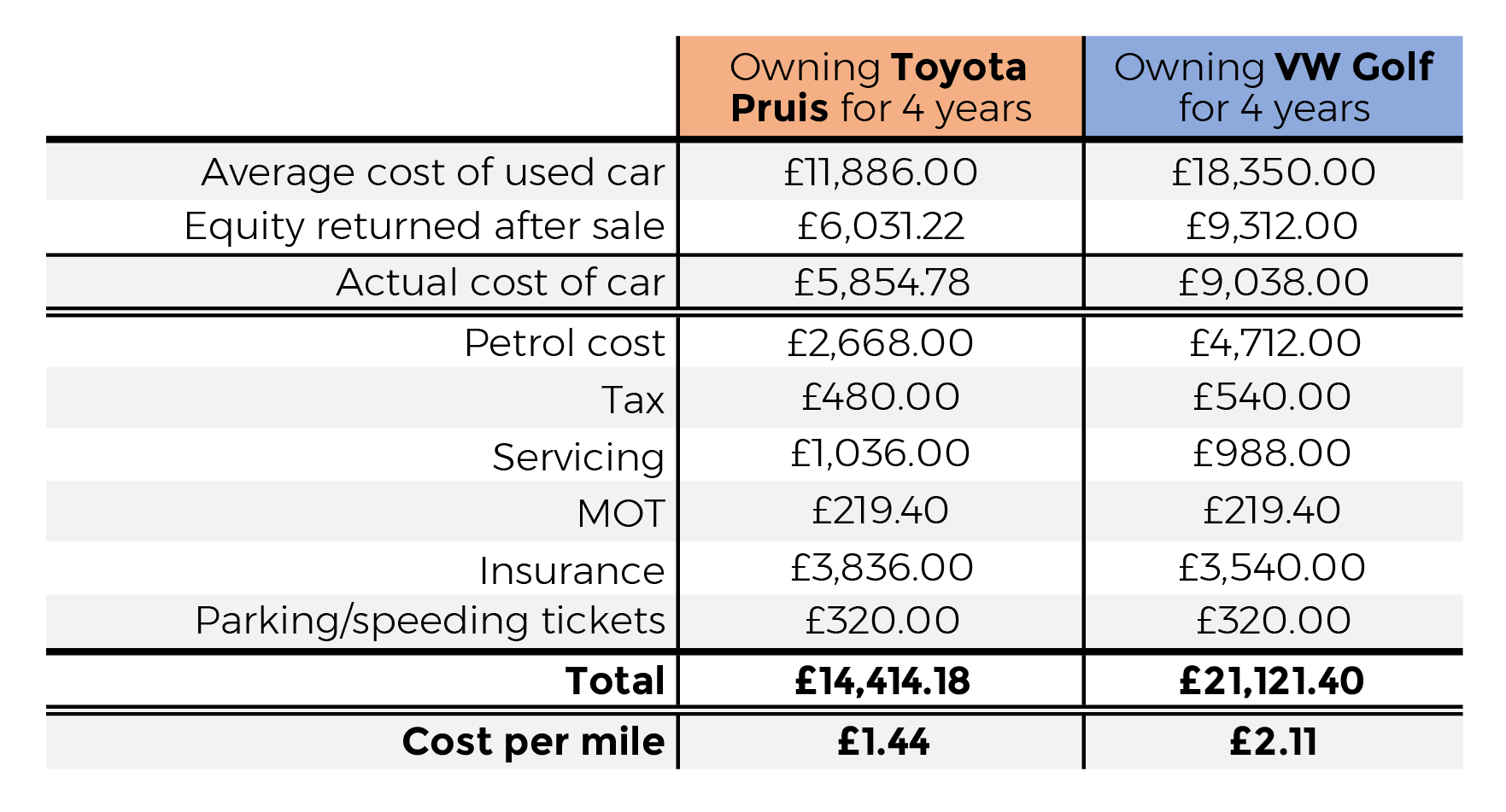 This data means that we can work out the estimated mileage costs for the average driver, who would travel 10,000 miles per year. A one-mile journey in a Prius costs the equivalent of £1.44, with golf a little higher at £2.11. But even that’s less than half the £4.23 cost of travelling a mile in an UberX, the cab-hailing app’s cheapest service.

The tipping point: when car ownership becomes the cheaper option

Of course, those figures assume everyone drives the average of 10,000 miles per year. It’s highly likely that Uber’s most frequent users won’t be needing to travel those distances annually, so we wanted to work out the tipping point – the minimum distance you’d need to travel each year before car ownership became the more affordable option. And the results were surprising.

Once you hit the 1000-mile mark, your annual bill as a car owner would be cheaper than the total of your Uber fares. Bear in mind that you’d only need to travel 2.74 miles per day to clock up a thousand each year. You’d have saved £531 by owning and driving your own Toyota Prius, compared to travelling in the back of one via Uber.

For the ever-popular VW Golf, that tipping point was slightly higher at 1,500 miles per year, by which point you’d already be £915 better off. That means you’d only need to travel around 29 miles in an Uber each week before owning a car of your own would have ended up saving you almost a thousand pounds.

There’s more to it than money

Impressive though these numbers are, there’s far more to car ownership than making the finances stack up. That feeling of freedom, knowing you can drive when and wherever you want, just can’t be rivalled. Uber may have got their wait times down to a few minutes, but there’s no guarantee they’ll be there for you when you need them most, and that they’ll be willing to take you wherever you want to go.

Ultimately, car ownership is a lifestyle. It allows you to get from A to B at your own pace, on your own schedule, exploring new places and experiencing new things. Uber may sell itself on convenience, but it isn’t going to make that cross-country weekend adventure a reality, or spare you the pain of the train on the 150-mile journey back to Mum and Dad’

With unrivalled freedom on offer, and hefty savings for anyone travelling more than 1,000 miles each year, millennials would surely be wrong to write-off car ownership.